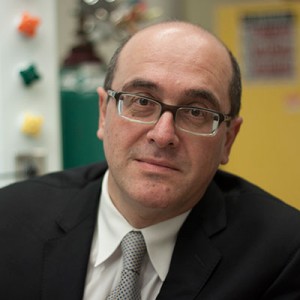 Alexander “Sasha” Kabanov, Ph.D., Dr.Sci., is the Mescal S. Ferguson Distinguished Professor and director of the Center for Nanotechnology in Drug Delivery at the UNC Eshelman School of Pharmacy and co-director of the Carolina Institute for Nanomedicine at the University of North Carolina at Chapel Hill. Kabanov graduated from M. V. Lomonosov Moscow State University (MSU) in 1984, where he also received Ph.D. in 1987 and D.Sc. in 1990. He started scientific career in Soviet Union and continued it in United States first, in the University of Nebraska Medical Center, Omaha, Nebraska (1994-2012) where he founded the first academic nanomedicine center in the United States (2004-), and then in the University of North Carolina at Chapel Hill (2012-).

Kabanov has conducted pioneering research in the nanomedicine field including the use of polymeric micelles, DNA/polycation complexes, block ionomer complexes, nanogels, nanoparticle-macrophage carriers and exosomes for delivery of small drugs, nucleic acids, and polypeptides to treat cancers and diseases of the central nervous system. Kabanov published seminal work on the use of polymeric micelles for drug delivery. He co-invented the first polymeric micelle drug to enter clinical trials to treat cancer and has been instrumental in establishing polymeric micelles as a clinically approved drug delivery platform. He was among the first to use polycations and later, cationic block copolymers for the delivery of nucleic acids into a cell and evaluated core-shell polyelectrolyte complexes of nucleic acids and polypeptides known today as “polyplexes” for the therapeutic drug delivery. Kabanov holds 36 United States patents and over 50 foreign patents. He co-founded several companies focusing on therapies of cancers and diseases of the central nervous system.

Kabanov has published 350 scientific papers and his work has been cited over 45,000 times (Hirsch index 107 as of July 2022). He has been named multiple times the Highly Cited Researcher in pharmacology and toxicology by Thomson Reuters, and Clarivate Analytics. His cumulative research support in academia has been over $120 million.

Kabanov trained over 70 graduate students and postdocs half of whom are women and underrepresented minorities. Sixteen of his trainees have become faculty members at various academic institutions across the globe. He was a founder and first director of the NIH Center of Biomedical Research Excellence (CoBRE) “Nebraska Center for Nanomedicine” (2008-2012), and is a Director of NCI’s T32 Carolina Cancer Nanotechnology Training Program. He has started in 2003 the first nanomedicine symposium series in the United States, NanoDDS (nanodds.org), held annually since then. He co-chaired and chaired multiple scientific meetings including Gordon Research Conferences “Drug Carriers in Medicine and Biology” (2006) and “Cancer Nanotechnology” (2017).

His honors include Lenin Komsomol Prize, NSF Career award, George Gamow award and Founders award of the Controlled Release Society (CRS). He was elected member of Academia Europaea, corresponding member of Russian Academy of Sciences, fellow of American Association for the Advancement of Science, American Institute for Medical and Biological Engineering, CRS, and National Academy of Inventors. He is past President of Russian American Science Association (RASA) and director-at-large, CRS.