Home / About / Our History 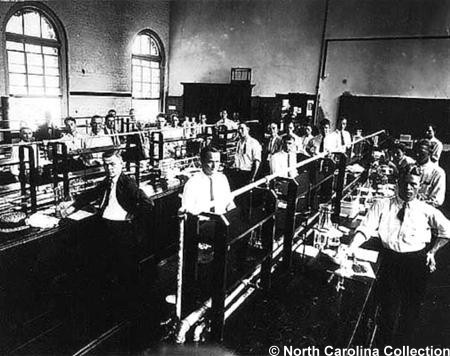 The UNC Eshelman School of Pharmacy, established in 1897 under Dean Edward Vernon Howell, is the only public school of pharmacy in the state of North Carolina and one of the oldest in the nation. More than half of the school’s 6,000 alumni live in North Carolina and serve the health-care needs of the state’s citizens.

More than a Century of Growth

The pharmacy school was established at the University of North Carolina in March of 1897 in response to urgent requests of the pharmacists of the state and on the recommendations of university administration. Edward Vernon Howell, a pharmacist from Rocky Mount, was appointed professor and dean of the School.

The first pharmacy class of 1897 had seventeen students, one instructor, and tuition was $75 a year. A dorm room ran $4 to $10 a month and board was another $5. The curriculum required two years of study and led to the graduate in pharmacy (PhG) degree.

In 2002, Banks D. Kerr Hall, an annex to Beard, was opened, doubling the space of the School and providing a modern research wing and outstanding new teaching facilities. A “building-inside-a-building” shared-instrument facility was created to house and isolate nuclear magnetic resonance and advanced microscopy equipment.

On May 21, 2008, the School was renamed in honor of Fred Eshelman, CEO and founder of Wilmington-based PPD Inc and a member of the Class of 1972. In 2003, Eshelman pledged $20 million to the School. At the time, it was the third largest single commitment in the University’s history and the largest ever made to a pharmacy school in the United States. He committed another $10 million to the School in 2007 to support educational initiatives and cancer research. On December 3, 2014, Eshelman again exceeded any previous gift to the University and to any pharmacy school in the United States with a $100 million commitment to the School. The new gift was used to found a center dedicated to accelerating collaborative innovations. To date, Eshelman’s total support of the School has amounted to approximately $133 million.

In 2008, the UNC Eshelman School of Pharmacy and the School of Medicine opened the Genetic Medicine Building located off Mason Farm Road, just east of the Environmental Protection Agency building. Pharmacy researchers occupy approximately 75,000 square feet of laboratory space on the first and second floor, allowing them to work closely with their colleagues in Medicine and giving Pharmacy a strong presence in the heart of Carolina’s health sciences campus.

To learn more about our history, read A History of the UNC School of Pharmacy by Professor Emeritus George H. Cocolas, focusing on the 1950s–2003.

Read A History of the UNC School of Pharmacy

Deans of the UNC Eshelman School of Pharmacy