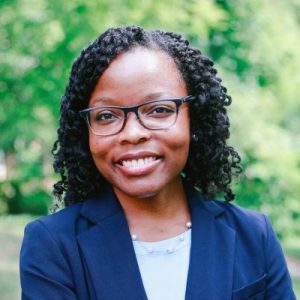 Klarissa Jackson, Ph.D. joined the faculty at the UNC Eshelman School of Pharmacy as an assistant professor in the Division of Pharmacotherapy and Experimental Therapeutics in 2019. Her research interests focus on drug metabolism and toxicology to better understand the mechanisms and risk factors of adverse drug reactions and improve drug safety.

Jackson’s research program has been supported by funding from the NIH National Cancer Institute Center to Reduce Cancer Health Disparities, the National Institute of General Medical Sciences, and the American Association of Colleges of Pharmacy. Her laboratory is currently investigating the role of cytochromes P450 in the metabolism and hepatotoxicity of tyrosine kinase inhibitors used in targeted cancer therapy. She is interested in understanding the impact of variability in drug metabolism and disposition on individual risk for drug toxicity. The long-term goal of this research is to better predict and prevent serious adverse reactions and improve drug safety in diverse patient populations.

The Jackson laboratory focuses on translational research in drug metabolism and toxicology to elucidate the mechanisms of and risk factors for adverse drug reactions. An important goal of the laboratory is to identify the genetic and environmental factors that contribute to inter-individual variability in drug disposition, drug response, and drug toxicity. Our laboratory is currently investigating the influence of individual variations in cytochrome P450 and UDP-glucuronosyltransferase enzymes on the metabolism and hepatotoxicity of tyrosine kinase inhibitors used in cancer therapy as well as the natural product cannabidiol used in epilepsy treatment. We are also engaged in collaborative research to evaluate the structure-metabolism-toxicity relationships of novel compounds in drug discovery. The long-term goals of this research are to improve the prediction of serious adverse reactions, mitigate drug toxicity, and accurately tailor drug therapy in diverse patient populations.Current research projects in the Jackson laboratory include the following:

The Jackson laboratory utilizes human-relevant in vitro systems (hepatic cell cultures, tissue fractions, and recombinant enzymes) and liquid chromatography – mass spectrometry to study drug metabolism and disposition and address fundamental questions regarding the molecular mechanisms of drug toxicity and inter-individual variability in drug disposition. We also collaborate with basic scientists and clinical investigators to develop innovative solutions that will have a broader impact on improving drug safety and precision dosing in various therapeutic areas.

Learn More About the Jackson Lab