We have been working on liposomes and lipidic nanoparticles for drug/gene delivery. Current activities are focused in the development of non-viral vectors for pDNA/siRNA therapy and receptor-mediated drug targeting.

Nanoparticles with Enhanced Cargo Escape from the Endosome

We have developed novel lipid bilayer enclosed nano-precipitate of cisplatin with greater than 80 percent drug loading. The nanoparticles efficiently deliver large amounts of cisplatin to tumor cells in vivo and showed a significant bystander effect. Cisplatin diffuses from the cells taken up the nanoparticles and kills the neighboring cells. Cisplatin NPs and Gemcitabine NPs can be co-encapsulated in the same PLGA NPs for precise ratio-metric delivery of two drugs for treating bladder cancer.

The tumor microenvironment (TME) serves as a multidrug resistant center for tumors under the assault of chemotherapy and a physiological barrier against the penetration of therapeutic nanoparticles (NP). Tumor associated fibroblasts (TAFs), the major cellular component of TME, are recruited by tumor cells to build the TME, which separates tumor vessels and tumor cells. We have originally discovered that combined NP containing gemcitabine and cisplatin efficiently kill TAFs and down-regulate TME, resulting in excellent inhibition of tumor growth.

However, a drug resistant phenotype gradually arises after repeated doses of chemotherapeutic NP. In a later study, the acquisition of drug resistant phenotypes in the TME after repeated cisplatin NP treatment was examined. Particularly, this study was aimed at investigating the effects of NP damaged TAFs on neighboring cells and alteration of stromal structure after cisplatin treatment. Findings suggested that while off-targeted NP damaged TAFs and inhibited tumor growth after an initial dose, chronic exposure to cisplatin NP led to elevated secretion of Wnt16 in a paracrine manner in TAFs. Wnt16 upregulation was then attributed to heightened tumor cell resistance and stroma reconstruction. Results attest to the efficacy of Wnt16 knockdown using a nanoparticle delivered siRNA against Wnt16 in damaged TAFs as a promising combinatory strategy to improve efficacy of cisplatin NP in a stroma-rich bladder cancer model.

Using the LCP nanoparticles, we have developed a novel cancer vaccine by encapsulating a peptide of a tumor associated antigen or its mRNA. Subcutaneous administration of the vaccine nanoparticles delivers the antigen to the dendritic cells in the draining lymph nodes and stimulates a strong cytotoxic T-lymphocyte response, leading to inhibition of tumor growth. Vaccine activity can be further enhanced by delivering siRNA against key cytokines, such as TGF-β, that control the suppressive tumor microenvironment. We are currently investigating siRNA, miRNA and/or small molecule drugs that can inhibit the myelo-derived suppressive cells and Treg cells to further enhance the vaccine activity. For example, sunitinib base encapsulated in PLGA NPs can normalize the tumor vasculature and greatly enhance the penetration of polymeric micelles.

Delivery of Plasmid DNA to Hepatocytes in Vivo

Through the use of a cationic peptide plasmid DNA is condensed and the delivered DNA was imported to the nuclei of the hepatocytes. Consequently, high levels of transgene expression in the liver were observed. This nonhydrodynamic method of in vivo gene transfer shows a high potential for liver gene therapy.

Using LCP nanoparticles, we are able to condense and encapsulate mRNA vaccines, disrupt endosomes for mRNA release, and potentiate dendritic cell maturation for potent immune response. The simultaneous LCP delivery of mRNA vaccine and siRNA against PD-L1 to DCs would further remove the negative regulator during the T cell priming process, lead to increased T cell activation and proliferation.
Publications

Metformin a widely implemented anti-diabetic regimen exhibits potent anticancer efficacies. Herein, a polymeric construction of Metformin, PolyMetformin (PolyMet) has been successfully synthesized through conjugation of linear polyethylenimine (PEI) with dicyandiamide. The delocalization of cationic charges in the biguanide groups of PolyMet reduces the toxicity of PEI both in vitro and in vivo. Furthermore, the polycationic properties of PolyMet permits capture of siRNA into a core-membrane structured Lipid-Polycation-Hyaluronic acid (LPH) nanoparticle for systemic gene delivery. Advances herein permit LPH-PolyMet nanoparticles to facilitate siRNA delivery for gene knockdown in xenografts, leading to enhanced tumor suppressive efficacy. Even in the absence of RNAi, LPH-PolyMet nanoparticles acts similarly to Metformin and induces antitumor efficacy through activation of the AMPK and inhibition of the mTOR. In essence, LPH-PolyMet successfully combines the intrinsic anticancer efficacy of Metformin with the tumor suppressive effects of siRNA to enhance therapeutic index of an anticancer gene therapy.

In collaboration with professor Rihe Liu, who has designed fusion proteins with high affinity binding to a chemo/cytokine or a receptor, we have used either LPD or LCP NPs to deliver plasmid DNA encoding a trap to the tumor or liver to relieve the suppressive immune microenvironment. The approach, with or without combination with a chemo drug or siRNA, often results in significant tumor growth inhibition. We have used several different traps against CXCL12, PD-L1, Wnt5a, IL-6 and IL-10 in orthotopic tumor models of breast, colon, pancreas and melanoma.
Publications

Desmoplastic tumors contain many tumor associated fibroblasts which are located near the microvessels. We have discovered that TAFs over-express sigma receptors such that NPs targeted with aminoethylanisamide are taken up by TAFs much more so than the tumor cells. This is a binding site barrier for NP delivery of drugs and genes to the tumor cells. We have turned the drawback of the off-target effect to a new strategy for cancer therapy by deliberately delivering drugs and genes to TAFs.
Publications

I was born into a college professor’s family in Taiwan. My father was a professor of horticulture for many years. When I was a teenager, I started working in his lab measuring sugar and protein content of Lichee fruit (it was delicious!).

My official science career started when I was a physics major at the National Taiwan University. In my junior year, I became immensely interested in biology. My professor, however, would not allow me to change to a biology major. I suffered through my senior year and decided to pursue my graduate study in biology, after the completion of a year of military service.

No US graduate program in biology would accept me because of my poor background in biology and chemistry. Only the biophysics program at Michigan State University had enough mercy and courage to take me as a graduate student. I still remember having to learn the difference between a microtubule and a microfilament in a freshman biology class. (I was the only graduate student in the class).

My first lab experience was with Professor Barney Rosenberg who had just discovered cis-platinum as a potent anticancer drug. I really did not have enough wisdom and intelligence to appreciate the work and I chose to work with another professor who played with electron spin resonance. Somehow, those electrons jumping between two giant magnets were much more friendly to me than those mice running around the cage.

I finished my Ph.D. in 1974 and took a postdoc position in Dr. Richard Pagano’s lab at Carnegie Institute of Washington. It took me and my newly-wed wife, Shilling, some time to get used to the life in a big city, i.e. Baltimore. Richard taught me the art and science of liposomes, which became my first love in science.

I went down to Knoxville, TN in 1976 to take on a position as an assistant professor of biochemistry at the University of Tennessee. As soon as we arrived, Shilling and I got lost in Knoxville and decided to ask for directions in a local gas station. A very nice man spent five minutes trying to tell me where the University was, but I could not understand him because of his heavy southern accent. I remember telling my wife, “Let us stay for a couple of years and then move back to the north.”

Well, that couple of years turned into fifteen. We fell in love with the city (picked up our own southern accents!). Our children grew up in Knoxville, and were very reluctant to leave when we decided to move to Pittsburgh in 1991.

We liked Pittsburgh a lot except for the occasional harsh winters. Shilling and I finally became used to our empty nest, as both of our children have left home for college. I liked my job at Pitt, which gave me a chance to direct a new Center for Pharmacogenetics. I also hoped that Professor Rosenberg would not notice the fact that I have started working with cis-platinum.

Well, the time came again for another move; this time, going back to the South. Our lab (the Laboratory of Drug Targeting) moved with me to the University of North Carolina at Chapel Hill in July of 2005. I am now an Eshelman Distinguished Professor at the UNC Eshelman School of Pharmacy.

Appointments and Positions (since 2010) 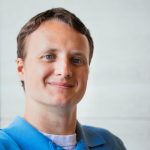 Thin-section electron micograph of AuSCL. Multilamellar liposomes with multi-AuSC can be seen in this preparation (bar: 0.5 micrometers).

Thanks to Simon Watkins, PhD, and the Center for Biological Imaging at the University of Pittsburgh for photo preparation and production.