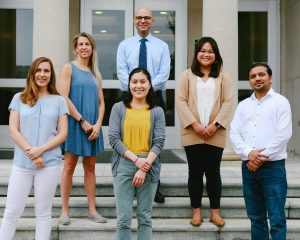 I am an Associate Professor in the Division of Pharmacotherapy and Experimental Therapeutics (DPET) at the UNC Eshelman School of Pharmacy. DPET seeks to improve lives by leading the world in translating experimental and clinical pharmacology discoveries into precision medicine.

The primary goal of my research program is to optimize pharmacotherapeutic efficacy and safety through the use of innovative clinical trial designs and application of mathematical modeling and simulation techniques, with an emphasis in pediatric populations. This is first accomplished by characterizing the differences in pharmacokinetic (PK) and pharmacodynamic (PD) relationships across human development, elucidating and quantifying influential factors of drug disposition, and the degree of interindividual variability surrounding them. Assessment of such changes are then related to deviations in drug effects and overall patient outcomes. With such characterizations established, optimal dosing regimens are derived, with a clinical impact in patient populations for which evidence-based dosing recommendations are frequently absent.

My experiences have afforded a highly collaborative and multidisciplinary research program that leverages pharmacological, mathematical, and statistical concepts for better-informed clinical trial design and medical decision-making. My research group is involved in numerous drug development programs focused on evaluating pediatric use of both new and off-patent therapeutics. As a principal investigator, I have received funding from the National Institutes of Health as well as the Thrasher Research Fund, have authored over 70 manuscripts and abstracts to advance such practice, and have served as the primary research advisor for 7 post-doctoral fellows and 3 graduate students.

Quantification of pharmacokinetic (PK) and pharmacodynamic (PD) parameters and the factors that influence them constitute the major focus of my research program. The unique constellation of ethical and logistical considerations inherent to pediatric drug trials present immense challenges in accruing sufficient data through traditional approaches. Children thus represent a vulnerable and understudied patient population, resulting in widespread off-label use of medications.

By performing clinical pharmacology studies and employing both population and physiologically-based PK/PD modeling and simulation techniques, we seek to characterize differences in drug exposure and effect across the pediatric age spectrum and identify the clinical correlates most associated with favorable pharmacotherapeutic outcome. The ultimate goal of such an approach is the provision of pediatric dosing information to clinicians for the betterment of patient care.

My group is directly involved in drug development programs focused on characterizing PK/PD properties, safety, and efficacy of new and off-patent drugs in the pediatric population.

Use of Electronic Medical Record Data to Assess Drug Disposition, Efficacy, and Safety

There are often ethical and logistical challenges to performing clinical trials in the pediatric population. Electronic medical record (EMR) data represents an easily accessible and voluminous resource for the assessment of drug efficacy and safety outcomes. In addition, for drugs where drug concentrations are assessed as part of routine medical care, these data can be used to validate existing PK/PD models. My group is involved in multiple projects focused on characterizing the clinical pharmacology properties of drugs widely used in the pediatric population using EMR data. 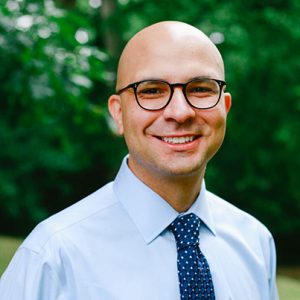 Daniel Gonzalez’s research interests include pediatric clinical pharmacology and the application of mathematical modeling and simulation techniques to characterize the pharmacokinetics and pharmacodynamics of drugs, guide dosage selection, and improve drug safety in children.

Dr. Jaydeep Sinha is a pharmacist and a pharmacometrician by training. Dr. Sinha is an Assistant Professor in the Department of Pediatrics of the 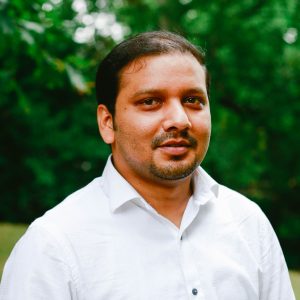 UNC School of Medicine and an affiliate of the Gonzalez Lab. His current research focuses on delivering safe and effective drugs to children using clinical pharmacology modeling and simulation (M&S). Dr. Sinha earned his Ph.D. degree in pharmacometrics from the University of Otago in New Zealand. He worked in M&S roles for several years in academia and the pharmaceutical industry, including his experience as a postdoctoral research associate at the UNC Eshelman School of Pharmacy and as a translational M&S scientist at a Bristol Myers Squibb drug discovery research center. 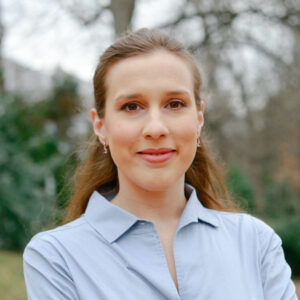 Eleni Caratzas is a UNC/GlaxoSmithKline (GSK) pharmacokinetics/pharmacodynamics post-doctoral fellow. Eleni received her Bachelor’s Degree in Pharmacy and her Master’s degree in Industrial Pharmacy from the National and Kapodistrian University of Athens, Greece. After working as a research associate in the Biopharmaceutics and Pharmacokinetics laboratory of the National and Kapodistrian University of Athens for two years, she joined a consulting company where she was involved in various aspects of drug development and authorization within the European Union. Understanding the importance of quantitative methods in drug development, she pursued Ph.D. training focusing on pharmacometrics. Three years later, she completed her doctoral studies at the National and Kapodistrian University of Athens. Her Ph.D. work was selected for the Lewis Sheiner Student Session award at Population Approach Group Europe (PAGE) meeting in 2020. Her current research interests include the development of population PK/PD and PBPK models and the application of data science techniques to facilitate pediatric drug development and therapeutics. She has authored 12 manuscripts and 20 posters that were presented at international conferences.

Abdallah Derbalah is a UNC/GlaxoSmithKline (GSK) pharmacokinetics/pharmacodynamics post-doctoral fellow. Abdallah received her Bachelor’s Degree in Pharmacy from Helwan University, Egypt where he ranked first among his class at both the faculty and university levels. He worked as teaching and research assistant at the Faculty of Pharmacy-Helwan University for 8 years. His teaching interests focused on pharmacokinetics and pharmacy practice undergraduate courses. He obtained his MSc. in Clinical Pharmacy in 2015 from Helwan University, Egypt. His Master’s thesis focused on optimising treatment of chronic hepatitis C which was endemic in Egypt at that time. He then joined Otago Pharmacometrics Group to pursue his Ph.D. in 2018. His Ph.D. experience encompassed a wide range of pharmacometric techniques including QSP, machine learning, and nonlinear mixed effects modelling which he applied to optimise anticoagulant therapy in children. Abdallah was the first author of 5 manuscripts associated his Ph.D. projects. His current research interests include developing and applying PBPK models to predict drug-drug interactions in children. 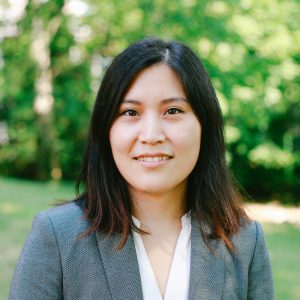 Angela Jeong is a UNC/Nuventra PK/PD Fellow. Prior to joining the fellowship, Angela received her PharmD and PhD in Experimental and Clinical Pharmacology at University of Minnesota. During her PhD training, Angela studied the role of a post-translational protein lipidation called prenylation in the pathogenesis of Alzheimer’s using immunoassays, transcriptome, and click chemistry-meidated metabolic labeling of prenylation substrates. Her current research project in Gonzalez lab involves the application of PBPK modeling of PPI in children with obesity. Angela is also interested in developing a quantitative systems pharmacology model for pathology progression in neurodegenerative disorders including Alzheimer’s disease. 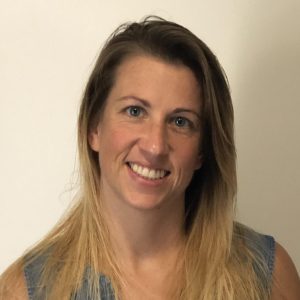 Jennifer Ford is a Postdoctoral Research Associate in the Division of Pharmacotherapy and Experimental Therapeutics at the UNC Eshelman School of Pharmacy working in the Gonzalez lab. Jennifer earned her PhD in Nutritional Sciences at Penn State University, where her research involved using physiologically based compartmental and noncompartmental modeling to quantify whole-body nutrient kinetics, answer metabolism-related questions, and assess nutrient status, especially in pediatric populations. Her work also included using model simulations and theoretical data to generate hypotheses and validate methods used for nutrient assessment. Jennifer’s current research focus involves the application of physiologically based pharmacokinetic modeling and population pharmacokinetics to study drug disposition in children with obesity. Jackie Gerhart is a graduate student in the Division of Pharmacotherapy and Experimental Therapeutics.  Jackie obtained her Bachelor’s and Master’s degrees in biomedical engineering from Drexel University.  Prior to joining UNC, she worked on numerous drug metabolism and pharmacokinetic projects in drug development at GlaxoSmithKline. Her research interests include leveraging modeling and simulation techniques to characterize alterations in pharmacokinetics in children and adolescents with obesity. 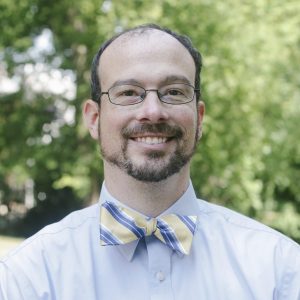 Stephen Balevic is an Adult and Pediatric Rheumatologist at Duke University and a clinical researcher at the Duke Clinical Research Institute (DCRI). His research interests are in clinical trials and precision medicine through population pharmacokinetic/pharmacodynamic modeling. He completed his clinical and research fellowships as well as a Master of Health Science Degree in Clinical Research at Duke University. He also completed the Eunice Kennedy Shriver National Institute of Child Health and Human Development (NICHD) sponsored, collaborative UNC-Duke Clinical Pharmacology T32 Training Program. He is currently a graduate student in the Division of Pharmacotherapy and Experimental Therapeutics at the UNC Eshelman School of Pharmacy. He also serves as the principal investigator on several foundation grants studying hydroxychloroquine and azathioprine pharmacokinetics and exposure-response in lupus. He is also a principal investigator or co-investigator for several clinical trials at the DCRI.

Patty Maglalang is a graduate student in the Division of Pharmacotherapy and Experimental Therapeutics. Patty obtained her Doctor of Pharmacy degree in 2021 at the University of Minnesota. During her undergraduate and pharmacy training, she conducted translational and clinical research such as preclinical studies and pharmacokinetic modeling to investigate novel therapeutics for rare neurological disorders. Her research interests include utilizing clinical pharmacology tools to optimize the efficacy and safety of therapeutics in the fields of neurology and special populations.