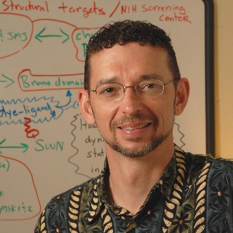 Stephen Frye is a Fred Eshelman Distinguished Professor, Co-Director of the Center for Integrative Chemical Biology and Drug Discovery, and Co-leader of the Molecular Therapeutics Program, Lineberger Comprehensive Cancer Center at the University of North Carolina in Chapel Hill. His laboratory’s research focuses on the chemical biology of chromatin regulation with an emphasis on proteins that bind methylated lysine, and oncology drug discovery.

Upon completing his PhD in 1987, Frye began his professional career as a medicinal chemist at the newly initiated US research site for Glaxo, located at that time in temporary facilities in Venable Hall on the UNC campus. He subsequently led the project that resulted in Avodart, GlaxoSmithKline’s dual 5alpha-reductase inhibitor for treatment of benign prostatic hyperplasia. Avodart was a billion-dollar drug in the GSK portfolio for many years.

Shortly after Glaxo merged with Wellcome in 1995, Frye established a new chemistry department in Research Triangle Park based upon kinase target class science and GSK’s kinase inhibitors, Tykerb (a dual erbB2/EGFR inhibitor approved for the treatment of metastatic breast cancer), and Pazopanib (approved for renal carcinoma) were discovered within this department. In 1999 he began a secondment at GW’s Stevenage site in the United Kingdom leading a research unit in medicinal chemistry. Following the merger with GSK in the spring of 2000, he was selected to lead GSK’s world-wide High Throughput Chemistry Group that evolved into Discovery Medicinal Chemistry (DMC).

Over the seven years Frye led DMC, the group grew to more than 200 chemists and developed global target-class chemical science and a compound collection strategy that enhanced both the productivity and quality of GSK’s hit and lead generation across all therapeutic areas. Stephen joined the UNC School of Pharmacy in October 2007 to create the CICBDD with sponsorship from the Lineberger Comprehensive Cancer Center, the School of Medicine, and the Department of Chemistry.

The Center for Integrative Chemical Biology and Drug Discovery was created with the mission of bringing dedicated medicinal chemistry expertise to bear on biological targets of therapeutic relevance under investigation by UNC faculty. Synthetic chemists, assay development and compound profiling scientists will work in the Center and create dedicated, multidisciplinary project teams with other groups on campus in order to progress targets through the drug discovery and early development process. The first Phase 1 trial with a compound discovered in the CICBDD was initiated in June, 2018.