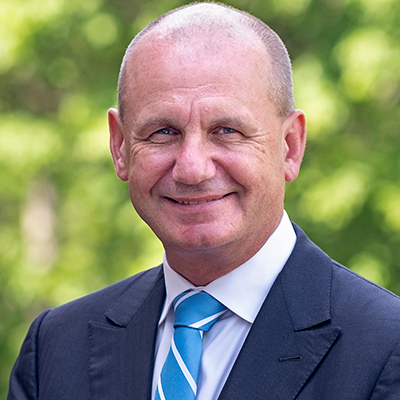 John is originally from the northwestern part of the UK but emigrated to the US in 2001. He now holds dual citizenship. A pharmacist with a PhD in neuropharmacology, John joined the Pharma industry in 1989 with Eli Lilly. Spending most of his career in commercial functions, he became recognized as a builder of global brands and leader of highly engaged teams.

Retiring from Lilly after 29 years, John returned to academia to lead the Eshelman Institute for Innovation at the University of North Carolina. The institute is focused on translating the brightest and best ideas on campus into products and services that impact patients. In his current role, John continues to advocate for diversity and inclusion and its demonstrated impact on performance and innovation.

John is on multiple boards including the Structural Genomics Consortium and Akanocure Pharma, where he is chairman of the board. John is also the interim Executive Director of READDI, a public-private partnership founded to develop novel anti-virals for the next pandemic.

John’s passion outside work is his family; he has two children, Thomas and Rebecca, with his wife Sue. They also have two West Highland Terriers, Luke and Lucky, who he takes for endless walks. John and Sue founded the Ciara Arts and Science Foundation in 2017 which supports college scholarships for disadvantaged youth. John is a keen golfer and general sports geek. He loves to attend big sports events like the Masters, Ryder Cup, Super Bowl, and Rugby World Cup.