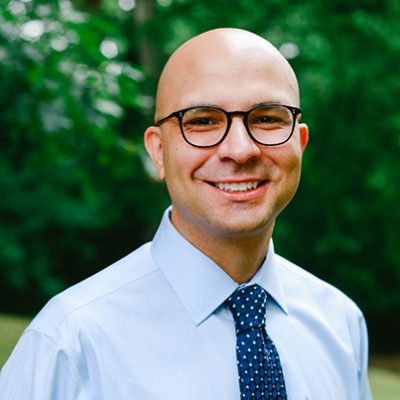 Daniel Gonzalez, Pharm.D., Ph.D., is an associate professor in the Division of Pharmacotherapy and Experimental Therapeutics of the UNC Eshelman School of Pharmacy. He has an adjunct appointment within the Department of Pediatrics in the UNC School of Medicine. He joined the UNC Eshelman School of Pharmacy in 2014 after completing a postdoctoral fellowship through the UNC-Duke Collaborative Clinical Pharmacology T32 Postdoctoral Training Program. Gonzalez received his Pharm.D. and Ph.D. from the University of Florida College of Pharmacy in 2008 and 2012, respectively. Gonzalez is a licensed pharmacist in North Carolina and Florida.

Gonzalez’s experiences have afforded a highly collaborative and multidisciplinary research program focused on advancing pediatric public health by promoting the safe, effective, and individualized use of drugs in children. His research interests include pediatric clinical pharmacology and the application of mathematical modeling and simulation techniques to characterize the pharmacokinetics and pharmacodynamics of drugs, guide drug dosage selection, and improve drug safety in children. Gonzalez’s research program is funded by the Eunice Kennedy Shriver National Institute of Child Health and Human Development (NICHD), and he has published >90 peer-reviewed publications and >40 abstracts. He has served as the major advisor for 6 PhD students, 14 postdoctoral fellows, and 2 professional degree students.

The overall objective of Dr. Daniel Gonzalez’s research program is to optimize pharmacotherapeutic efficacy and safety through the use of clinical and experimental data, and the application of mathematical modeling and simulation techniques, with an emphasis in pediatric populations. This is first accomplished by characterizing the differences in pharmacokinetic (PK) and pharmacodynamic (PD) relationships across human development, elucidating and quantifying influential factors of drug disposition, and the degree of interindividual variability surrounding them. Assessment of such changes are then related to deviations in drug effects and overall patient outcomes. With such characterizations established, optimal dosing regimens are derived, with a clinical impact in patient populations for which evidence-based dosing recommendations are frequently absent.

The Gonzalez Lab is currently focused on research in the following areas:

Dr. Gonzalez directs a National Institutes of Health (NIH)-funded research program focused on the application of population and physiologically-based pharmacokinetic/pharmacodynamic modeling and simulation techniques to characterize drug disposition and effects, guide dosage selection, and improve drug safety in the pediatric population. Through application of these techniques, the Gonzalez Lab seeks to optimally design clinical trials, understand the mechanistic underpinnings that affect drug disposition and effects with age and body size, and account for patient factors that contribute to pharmacokinetic/pharmacodynamic variability in children.

Learn More About the Gonzalez Lab