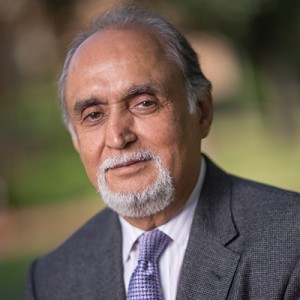 Dhiren Thakker, Ph.D., is an emeritus professor at the UNC Eshelman School of Pharmacy.

Thakker has been a member of the School’s faculty for more than 20 years. Before being named interim dean, he served as the associate dean for entrepreneurial development and global engagement. He is also a researcher focusing on drug absorption and metabolism, as well as a successful entrepreneur.

Thakker came to the University of North Carolina at Chapel Hill in 1996 after a career in research at the National Institutes of Health and in drug discovery at Glaxo, Inc., now GSK. Just two years after joining the School, he became the associate dean of graduate and research programs. He has taken other significant roles, including serving as the associate dean for entrepreneurial development and global engagement, director of the Campbell Faculty Mentoring Program and the Howard Q. Ferguson Distinguished Professor of Pharmaceutical Sciences. He has mentored dozens of graduate students, postdocs and visiting international scholars and paved the way for pharmacy students to experience education on a global scale.

Just two years after coming to UNC, Thakker assume the role of associate dean of graduate and research programs. He is also a scientific founder and member of the board for Qualyst, Inc., a venture capital–backed business venture that spun out of his research on drug metabolism. He also worked at the Food and Drug Administration..

Mechanisms of drug transport; structure-transport relationships; prodrug strategies for tumor-targeting; metabolism of drugs and xenobiotics; delivery and disposition of macromolecules