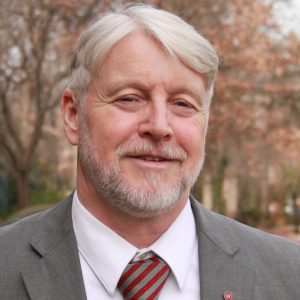 Professor of the Practice Director for UNC Catalyst Emeritus Faculty

Anthony Hickey, PhD, is the director of the UNC Catalyst for Rare Disease. He is a Distinguished RTI Fellow and program director in inhaled therapeutics at the Center for Aerosol and Nanomaterials Engineering at the Research Triangle Institute; professor emeritus in the Division of Molecular Pharmaceutics at the UNC Eshelman School of Pharmacy; and an adjunct professor of biomedical engineering at the UNC School of Medicine.

Hickey obtained his PhD (1984) and DSc (2003) in pharmaceutical sciences from Aston University in Birmingham, UK. Following postdoctoral positions at the University of Kentucky (1984-1988), he joined the faculty at the University of Illinois at Chicago (1988-1993) before coming to UNC, where he was a professor at the School from 1993 to 2010.

Hickey is the founder of two pharmaceutical companies — Cirrus Pharmaceuticals Inc. (1997) and Oriel Therapeutics Inc. (2001). He served as chief science officer of Oriel Therapeutics from 2002 to 2007, and the company was acquired by Sandoz in 2010. He has also served as president and CEO of Cirrus Pharmaceuticals since its founding. In addition, Hickey is a member of the Pharmaceutical Dosage Forms Expert Committee of the United States Pharmacopeia (2010–2015) and former chair of the Aerosols Expert Committee of the United States Pharmacopeia (2005-2010).

Characterization of tau hyperphosphorylation in ARSACS