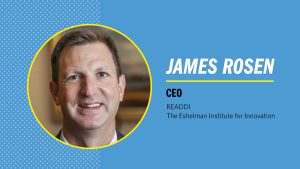 The Eshelman Institute for Innovation initiative leader brings a convergence of public health passion, business acumen and entrepreneurial leadership to the role.

READDI began with a groundbreaking collaboration between the University, the UNC Eshelman Institute for Innovation and the Structural Genomics Consortium. The READDI team works to give humanity an early advantage against future diseases, such as COVID-19.

It’s a tough challenge, Rosen knows, but he brings an affinity for hard work, skills in business building and problem solving, and an attitude of collaboration and partnership that are essential to achieving READDI’s goals.

“The opportunity to work with colleagues who share a passion to make investments that have the prospect of changing the world has been amazing,” said Rosen. “Throughout my career, the focus has not just been on supporting research to develop products for commercialization. It’s included a concerted effort to develop medicines and products that will be affordable and accessible to everyone who needs them, such as underserved communities and those living in remote geographies.”

Public health and health care weren’t on Rosen’s mind when he graduated from Duke University with a bachelor’s degree in public policy. Instead, he was focused on business. After graduation, he moved to Colorado where he started a successful financial analytics company. He also accrued 1,000 hours of search-and-rescue and paramedical training during his four years in the state. After the sale of his business, Rosen contemplated becoming a health care provider but realized his interests weren’t exclusively finance or health care. They were at the intersection of health care research and business.

The change in career brought him back to the Triangle, where he knocked on doors and enrolled in basic science classes to learn more about scientific research. “It was a frustrating and humbling experience because I lacked the relevant background, and no one was willing to take a chance on me,” said Rosen. “Then I met Barbara Rimer, who was then director of cancer prevention, detection and control research at the Duke Comprehensive Cancer Center. She gave me an entry-level job entering survey data, which opened the door.” He subsequently worked as an independent contractor supporting Rimer in her next role at the National Cancer Institute while also managing clinical trials for a private clinical research organization in Chapel Hill. Rimer became dean of the UNC Gillings School of Global Public Health in 2005 and stepped down from that role Aug. 31, 2022.

At the calling of a prior mentor, Rosen headed to Wall Street in the late ’90s with his research experience and worked in biotechnology and medical device finance. After three years in New York, he returned to Chapel Hill. “I felt very removed from public health and research,” said Rosen. He enrolled in a dual-degree program at UNC Kenan-Flagler Business School and the Gillings School and graduated in 2007 with an MBA and master’s in public health.

Over the next 15 years, Rosen combined his business acumen and passion for public health as a partner with Intersouth Partners, investing in early-stage life science companies, and then as deputy director of venture investing at the Bill & Melinda Gates Foundation. In the five years leading up to READDI, Rosen worked on the operating side as CEO of Artizan Biosciences, a biotech spinout from Yale University.

When asked about the priorities in his new role, Rosen said: “My job is to build, equip and support the team that is going to rapidly prepare for the next pandemic in which antiviral drugs will play a critical role. We must form global partnerships with for-profit and nonprofit organizations, and work collaboratively with policy makers and regulatory agencies to adapt the current paradigm to rapidly develop, test and deploy new drugs.”

As he and his family are back home in Chapel Hill, Rosen is excited to once again be a part of the Carolina community. He is grateful for the mentors he’s had along the way and others in his life who made it possible for him to lead the READDI team in its efforts to prepare for the next pandemic.

“With continuing support from the UNC community and a global network of academic, corporate, government and financial partners who share our passion, we will achieve our mission to provide safe and effective antiviral medicines to everyone in the world who needs them,” Rosen said.