“I’m honored to receive this promotion and want to thank all of my collaborators and mentors who helped get me here. I look forward to further advancing global health education and training both locally and globally.” Steeb said.

Steeb also serves as the School’s director of global engagement and adjunct senior lecturer at Monash University Faculty of Pharmacy and Pharmaceutical Sciences in Melbourne, Australia. He received his Bachelor of Science in chemistry and biology from the University of Miami and his Doctor of Pharmacy from the UNC Eshelman School of Pharmacy. In 2013, Steeb developed and became the first Global Engagement Fellow at the UNC Eshelman School of Pharmacy. He received his Master of Public Health at the UNC Gillings School of Global Public Health.

As a faculty member, Steeb conducts research on global health education and training and collaborates with faculty at other UNC health science schools in developing curricula at the intersection of pharmacy and global health.

As director of global engagement, Steeb engages students and faculty in a variety of global activities and initiatives such as the Global Pharmacy Scholars program which has sent nearly 200 students to Australia, England, Ethiopia, Honduras, India, Japan, Malawi, Moldova, or Zambia for an international rotation experience. He also works with faculty in developing international collaborations such as PharmAlliance, a unique partnership between three leading pharmacy schools, including Monash University Faculty of Pharmacy and Pharmaceutical Sciences in Melbourne, Australia; University College London School of Pharmacy in London, England; and the UNC Eshelman School of Pharmacy.

Steeb is a former American Pharmacists Association (APhA) board of trustees member and currently serves as the founder and coordinator of the APhA Public Health SIG. He is also an active member of the American Association of Colleges of Pharmacy (AACP) and the International Pharmaceutical Federation (FIP). Steeb is a recipient of the AACP New Investigator Award and the APhA Distinguished New Practitioner Award. 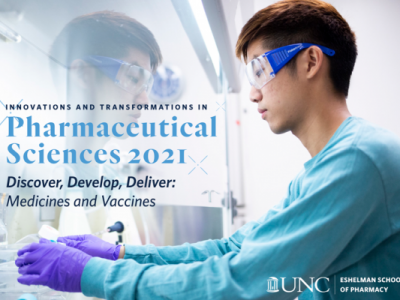