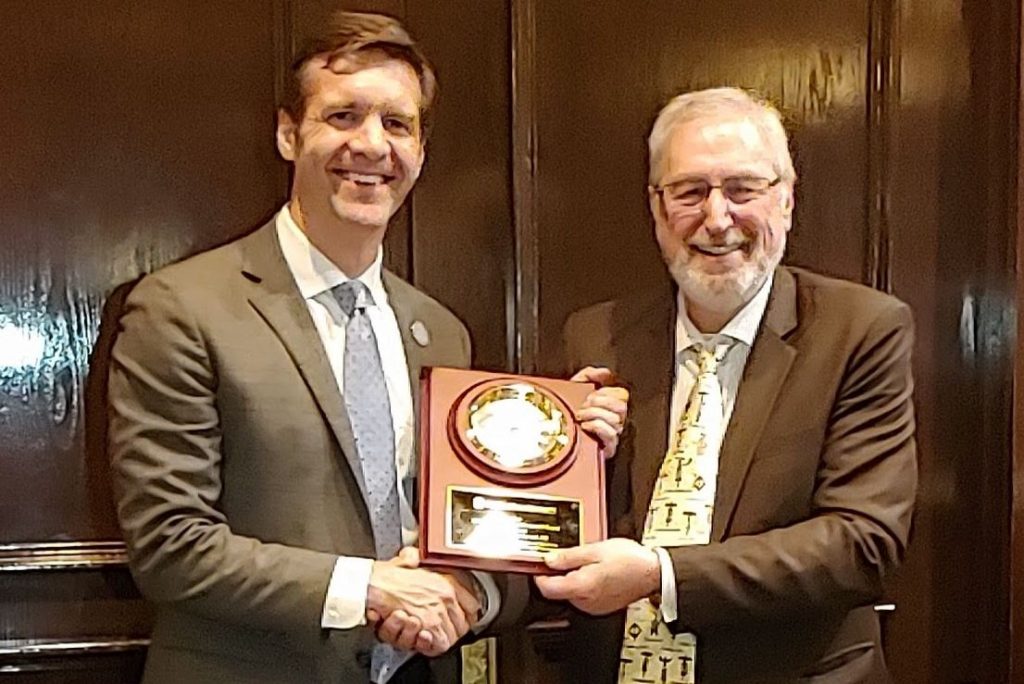 Even after decades in the field of pharmacy, Scott Savage said he still gets a nervous feeling in the pit of his stomach because he’s doing work he’s passionate about and he wants to get it right.

The Jerry Siegel Clinical Achievement Award is intended to recognize one of the more than 300 past graduates of the PGY1 and PGY2 programs of The Ohio State University Wexner Medical Center and College of Pharmacy residency programs, said Jerry Siegel, the award’s namesake.

“It is important to recognize one of our graduates who have made significant impacts in the advancement of clinical practice, of course while demonstrating the Buckeye spirit,” Siegel said.

Siegel added that clinical pharmacy practice continues to have a major impact on the healthcare of patients. Residency training has enabled pharmacists to advance the practice of pharmacy and provide a new standard to which all patients have come to expect.

Nearly 75 participants, including more than 30 residents, filled the room the evening Savage received the award. “Like many of you here tonight, I am indebted to The Ohio State University Wexner Medical Center Residency Program and The Ohio State University College of Pharmacy. The experience it gave me continues to transform my life and I do my best to pay it forward daily,” Savage said. “I stand before you this evening with sincere gratitude.”

The same week Savage earned the Clinical Achievement Award, he was also honored with a team of UNC Health Care System Pharmacy Services’ employees as one of the 2019  American Society of Heath System Pharmacists Best Practices Award recipients, which recognizes pharmacists who demonstrate leadership and innovation in enhancing patient care and other areas of pharmacy practice.

“It’s humbling,” he said. “To be recognized by your peers in the profession on a national level and from your alma mater, it’s an honor.”

Today, Savage holds the title of Executive Vice Dean-Chief Operating Officer at the UNC Eshelman School of Pharmacy. He received his Doctor of Pharmacy degree from the University of North Carolina at Chapel Hill in 2002.

Prior to joining the UNC Eshelman School of Pharmacy in May 2019, Savage served in a variety of leadership positions within UNC Health Care System pharmacy leadership team.  Most recently, he served as the Regional Director of Pharmacy covering all clinical and distributional operations for UNC Medical Center in Chapel Hill and Hillsborough, NC,  Chatham Hospital located in Siler City, N.C., and a handful of shared services across UNC Health Care System.

As for next steps in his career, he said he’s focused on the UNC Eshelman School of Pharmacy. “I came to the School because we are Advancing Medicine for Life.”