A group of twenty researchers from the University of Nebraska moved halfway across the country this summer to the University of North Carolina at Chapel Hill to join the Center for Nanotechnology and Drug Delivery in the UNC Eshelman School of Pharmacy.

Led by Alexander “Sasha” Kabanov, PhD, who will direct the center, the group comprises Elena Batrakova, PhD, and a team of eighteen that includes three research faculty, postdoctoral fellows, research managers, and technicians, along with five graduate students who transferred to Carolina to continue their education. Kabanov’s group brings to UNC a research program that will receive more than $2.5 million in research funding from the National Institutes of Health over the next three years.

“Dr. Kabanov is a world leader in the delivery of pharmaceuticals and other biologically active compounds using polymers and nanomaterials,” says Bob Blouin, PharmD, dean of the School. “I am very proud and gratified that he has chosen to join us here at the UNC Eshelman School of Pharmacy.”

Kabanov works primarily in the areas of polymer-based drug and gene delivery, as well as biologically active polymers. He established the field of polymer genomics, which investigates the effects of polymers and nanomaterials on cellular responses to develop safe and efficient therapeutics. He is a pioneer in the use of nanotechnology to treat cancer and other diseases and is known for his discovery of a polymer that can make anticancer medications up to one thousand times more effective against drug-resistant tumors than conventional chemotherapeutic agents. He has also invented technologies that hold promise for more effective treatments of brain-related diseases such as stroke, Alzheimer’s, and Parkinson’s.

“I want to spend the rest of my career putting into practice scientific concepts in nanomedicine that I helped to create during the first half,” Kabanov says. “It is essential that the results of our work are translated to commercial products that will help people. There is no better place than UNC and Research Triangle Park to achieve that. ”

He cofounded and sits on the boards of two companies including Supratek Pharma Inc. The Pluronic-based micellar formulation of Doxorubicin, SP1049C, developed by Supratek, has successfully completed the Phase II clinical trial. It is the first polymeric micelle drug to reach the clinical stage.

After receiving his PhD from Moscow State University, Kabanov joined the faculty of the UNMC College of Pharmacy in 1994, where he established a research program that would grow into a nanomedicine group with more than thirty faculty. He was named the Parke-Davis professor and director of the UNMC nanomedicine center in 2004. Kabanov is the author of more than 220 peer-reviewed papers and sixteen book chapters. He is named as an inventor or co-inventor on twenty-six U.S. patents and more than one hundred patents worldwide. In 2010 he became the first chemist awarded a $4.5 million “megagrant” by the Russian government to open laboratory of Chemical Design of Bionanomaterials, of which he is a director, at Moscow State.

He joins the School as the Mescal Swaim Distinguished Professor in the Division of Molecular Pharmaceutics and is also named a codirector of the Carolina Institute for Nanomedicine in addition to directing the CNDD.

“I look forward to new creative collaborations in science and education both within and outside of the School,” Kabanov says, “Collectively we have the best nanomedicine team in the world here at UNC.”

Batrakova also received her PhD from Moscow State and was one of the first trainees in Kabanov’s UNMC lab in 1995. She was named a research associate professor at Nebraska in 2010. She joins the School as an associate professor in MOPH and a as member of the CNDD.

“It has been less than three months my lab has joined UNC,” she says, “But we are already feeling the strong support from the School and the University. It’s amazing how much time, energy, and effort was dedicated to make our transition smooth and fast. I think we are fortunate to work at such wonderful place.”

With NIH support, Batrakova is developing cell-mediated delivery of therapeutic polypeptides to the brain for treatment of Parkinson’s disease using inflammatory-response cells, monocytes and macrophages, as vehicles. She is also devoted to development of a new drug delivery polymer-based system of chemotherapy to treat multidrug-resistant tumors, and central nervous system disorders. Batrakova is the author of nearly eighty peer-reviewed publications and six books chapters and holds ten patents. 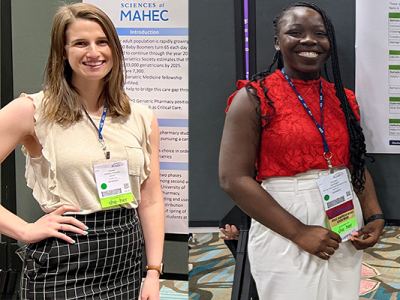